On our first full day in Iceland, Lucas and I planned to do a self driving tour of the Golden Circle, which consists of the continental divide (Thingvellir), the original geyser (along with some other geothermal features) and the Golden Falls, Gullfoss.  The weather was a little drizzly and cold, but not totally unpleasant.  After a breakfast at the hotel we stopped at Alafoss, because we had read that that it was a great place to buy authentic Icelandic wool/hand knit sweaters for far less than the supertouristy shops in Reykjavik.  I bought some yarn for my mom, and a hand knit hat for myself (I hadn’t realized how steep the sweater prices were, several hundred dollars on average and figured I would get more use out of a hat anyway).  The knitting was really impressive.

We next arrived at Thingvellir, and spent a considerable amount of time hiking around the continental divide.  The visitors center was interesting, and explained the historical significance of the location, it was used for important meetings dating back to the Viking days.

We grabbed lunch at a cute restaurant overlooking one of the lakes and had burgers, more specifically Lucas had a reindeer burger (and I had a regular one).  Delicious. Then it was on to Geysir, which doesn’t erupt frequently anymore, but there are other geysers in the area that do.  It was much different than Yellowstone since they allow you to get very close to the geysers and when they erupt, oftentimes people get wet.

Gullfoss was an impressive waterfall, although I’ve heard it is even more so when the sun is out.  We hiked around it (in the rain).

After visiting the falls, we headed to Selfoss to complete the circle and stopped at a crater lake we happened upon on our drive.  We hiked the upper and lower perimeters and the views were amazing! 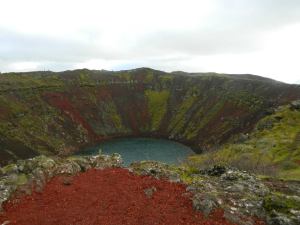 Overall, we enjoyed the golden circle a lot, and it is definitely doable as a self driven tour.  The signs are well marked and it is much easier to navigate than the Reykjavik metro area, so don’t be intimidated!